A new record was found  2016  in the West Virginia Wills and Probate Records that indicate that William Redden Sr.s death date is not as previously thought. It was thought to be1862 because preveously that was the last known date showing a place of residence or of tax records. The record below leads us to believe his year of death was 1869. 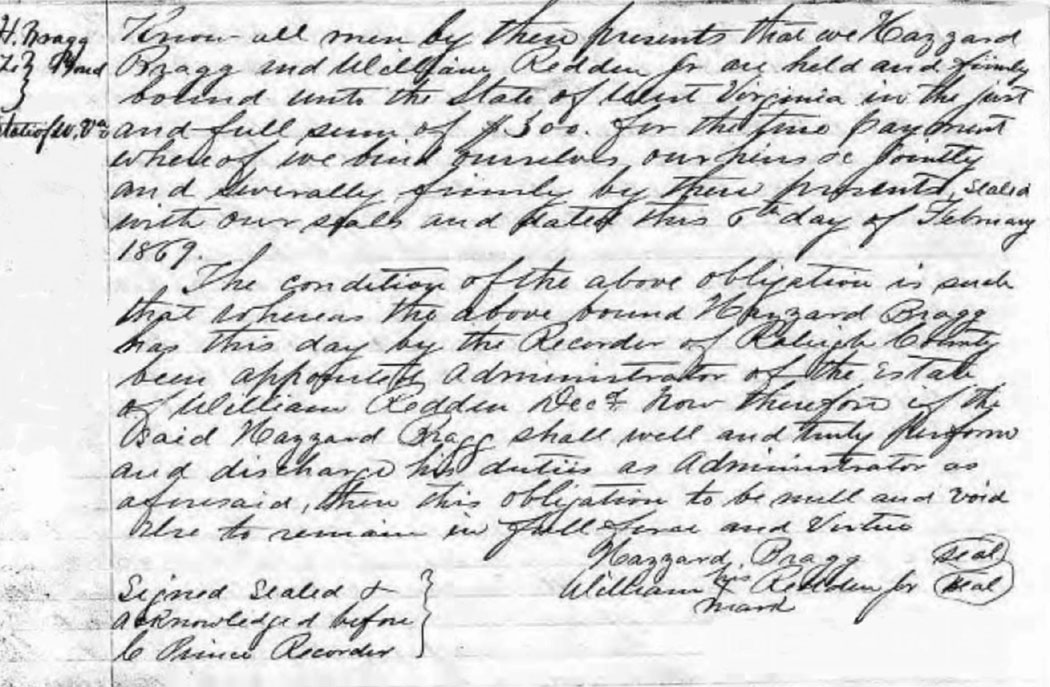 Transcribed from original above

Know all men by these presents that we, Hazzard Bragg and William Redden Jr., are held and firmly bound unto the State of West Virginia in the just and full sum of $300 for the time payment where of we bind ourselves our heirs oe (omissions excepted) jointly and severally, firmly by these presents sealed with our seals and dated this 6th day of February 1869.

The condition of the above obligation is such that whereas the above bound Hazzard Bragg has this day by the Recorder of Raleigh County been appointed Administrator of the Estate of William Redden Dec. d/+ (deceased) Now therefore if the said Hazzard Bragg shall well and truly perform and discharge his duties as Administrator as aforesaid then this obligation to be null and void, else to remain in full force and virtue.

Attempting to sort out who William Redden Sr. is, or what was his real complete name.

One would surmise, that John, Christina's husband, the son-in-law of William Redden Sr. should know what his father-in-law's name was.

We decided to take a closer look at the record, looking at what we believed to be the "C" in the record. We then looked for an expert of handwriting from the 1800's. We found an example that confirms that the letter in the record is a capital C. The example below of a capital C shown in the center of the handwriting examples, matches that of the record. The example is from a book called "Handwriting of American Records for a period of 300 years" by E. Kay Kirkham, Genealogist, and Published by The Everton Publishers Inc. P.O.Box 368 Logan, UT 84321

Above is shown an enlarged area of the  record, it reads:  53 Wlm C & Francis Redden

Example of old cursive C shown in the above center section

In the Raleigh County Death Record of John Redden Sr. it lists the died death date as, Sep. 13, 1885 in Raleigh County at the age of 87. The cause of death was reported as old age. The reporting family member was recorded as J.H Redden the son of the deceased.

Raleigh County Death Record also records the death of J.H.Redden as Apr. 9, 1899, in Raleigh County, at the age of 76. The cause of death was listed as Bright’s disease. The parents were listed as Wm. & Fannie Redden.

It appears that we are looking at two different families with children who had the same initials?

To date, no other document, census, military, land, or tax record has been found where the name John William Redden was used. All other records found use only William Redden Sr. or John Redden Sr.

Ferther research reveals that we are indeed looking at two diffrent individuals having sons with the same name and living in the same general area.

Below is a partial copy of that record:

Note: The link below contains photographs and may take a few seconds to load.

Views From The Past

William Redden Sr. and Fanny Kaylor's migration in Virginia. The formation of various counties, and changes in the county lines which occurred before West Virginia was formed. Areas of family history that are being researched.

In 1810 William Redden Sr. and Fanny Kaylor, according to family history, came across the mountain to what is now Raleigh County, West Virginia and bought a farm on the flat plateau on top of New River Mountain, between Mill Creek and Glade Creek. At that time the county they settled in was Giles County, Virginia

Raleigh County was formed in 1850 from Fayette County Virginia.

Fayette County was formed in 1831 from parts of Kanawha, Greenbrier and Logan Counties.

Giles County was formed in 1806 from Montgomery, Monroe, Tazewell, Craig, Mercer, and Wythe.

Because of changes in county lines, following the Redden and Kaylor arrival in the area in 1810, records pertaining to family births, marriages, deaths and land titles ect. may be found in various county seats, depending upon which was the governing county at the time.